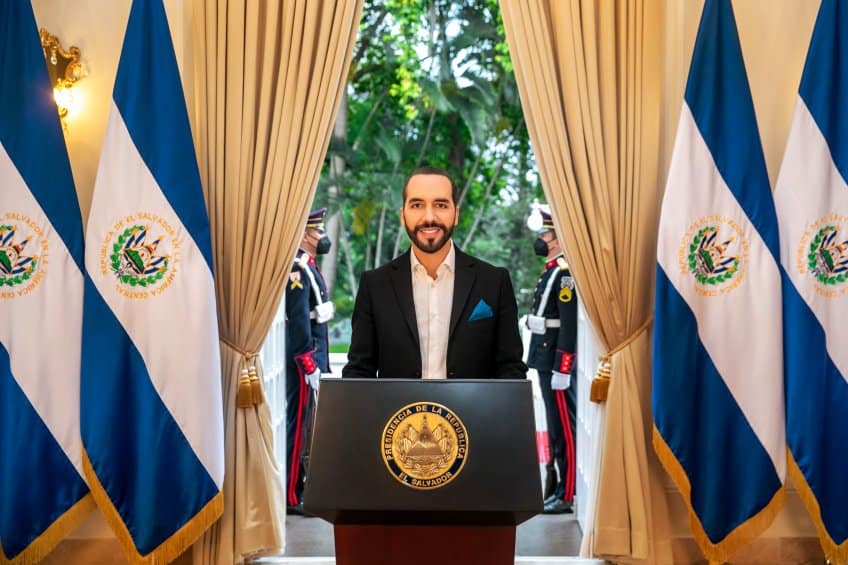 In the 2019 presidential elections, Bukele broke 30 years of two-party dominance by the traditional political parties FMLN and ARENA.

In his first two years in office, Nayib Bukele has maintained the highest approval rate of any Salvadoran president. Many attribute this high approval to homicide reduction and the management of the pandemic.

Who is President Nayib Bukele?

Nayib Bukele is a Salvadoran business owner and politician; at the age of 38, he became the 46th president of El Salvador. During his political career and as a member of the left-wing political party (FMLN), he served as mayor of Nuevo Cucatlan and the nation’s capital, San Salvador.

Bukele studied law at the Jesuit Central American University (UCA) in San Salvador; but didn’t graduate. At the age of 18, Bukele started working at one of his father’s businesses.

Nayib Bukele is married to Gabriela Rodríguez de Bukele. In August 2019, Nayib Bukele and his wife welcomed their first daughter, Layla, to the family.

Armando Bukele Kattan was a chemical engineer of Palestinian origin. He was a well-respected Salvadoran businessman. Armando Bukele pass away in 2015.

Armando Bukele founded the first mosque in El Salvador in 1992. He was the Imam of El Salvador, a spiritual leader of the Salvadoran Muslim community.

Olga Ortez de Bukele has no public profile or public political or business history. In addition to President Bukele, she had three other kids; Karim Alberto, Ibrajim, and Yusef Ali.

Bukele’s first public office job was mayor of Nuevo Cuscatlan, a small municipality in La Libertad. He then became the city mayor of San Salvador, the largest and most prestigious municipality in the country.

Nayib Bukele’s first role in public office was as mayor of Nuevo Cuscatlan, a small municipality in the department of La Libertad.

Nayib Bukele served three years as mayor of Nuevo Cuscatlan; during his term, he took this unknown municipally from obscurity to one of the best in the country.

The FMLN party didn’t like Bukele’s government style at Nuevo Cuscatlan. However, they couldn’t deny his popularity and the job he was doing as mayor.

Therefore, the FMLN party decided to make Bukele their candidate for the San Salvador City Hall. The most prominent City Hall in the country.

For this election, Bukele ran under the FMLN political party flag and coalition with Cambio Democratico CD.

Once he became mayor, he implemented the same type of governing as he did in Nuevo Cuscatlan. Something that didn’t make the FMLN leadership happy.

During his tenure as mayor of the nation’s capital, he made the city organized, safer, and cleaner; as a result, his popularity grew even more.

Bukele’s City Hall administration did many projects to benefit the municipality. The most popular and well-known project of his time in office was the refurbishing of the historic district.

The San Salvador historic area was known as crime-ridden and violent. Bukele changed it to one of the most popular and safe destinations in the capital.

To sum up, Mayor Bukele finished his three years as mayor with the highest approval rate of any previous mayor. Furthermore, the city’s rating as a place to do business also went up. So, why did the FMLN expulsed him from the political party?

Nayib Bukele’s Expulsion from the FMLN

In 2017, Nayib Bukele and the FMLN leadership clashed over different issues. It included the direction the party was heading and how Sanchez Ceren, the current president, was governing.

Around September 2017, the FMLN ethics committee accused Bukele of the following and scheduled a hearing:

Nayib Bukele did not attend the scheduled hearing. In October 2017, the FMLN Ethics Tribunal ruled against Nayib Bukele and expelled him from the party.

Nayib Bukele’s expulsion from the party came at a high cost to the FMLN. In the next municipality elections held in 2018, the FMLN lost 20 municipalities that they previously held, including San Salvador. Additionally, they lost 8 Senate seats.

According to political experts, the FMLN 2018 loss was due to the way they were governing the country. But mainly for expelling the most popular and predominant party member, Nayib Bukele.

Bukele’s expulsion marked a significant step in Nayib Bukele’s journey to becoming the next president of El Salvador.

After being expelled from the only political party he was affiliated with, Nayib Bukele decided to create his own Political Party. It was done so he could participate in the 2019 presidential elections.

From late 2017 and throughout 2019, Bukele’s approval rating was the highest of any potential presidential candidate.

Furthermore, all the polls showed him as the imminent winner in the 2019 elections. All he needed now was a way to get on the ballot.

There are many requirements to start a new political party in El Salvador. But, the most tedious and time-consuming is getting 50,000 signatures supporting you in 90 days.

Nayib Bukele was so popular at the time that he obtained 200,000 signatures in only three days.

The Salvadoran Supreme Electoral Tribunal or TSE didn’t approve the new political party in time for the 2019 presidential elections. Therefore, Bukele was not able to compete with its political party, New Ideas.

The non-approval of New Ideas meant that to compete in the 2019 elections, Bukele needed to do it under another political party.

Cambio Demoratico or CD was the logical choice, after all, CD and Bukele had formed an alliance in previous elections.

The TSE’s non-approval of New Ideas meant that Bukele needed to join another political party. To compete in the 2019 elections, Nayib Bukele registered as a presidential candidate with Cambio Democratico (CD).

Everything was set; Bukele was going to run for president in 2019 under the flag of Cambio Democratico.

And what you know, on the last night for individuals to register themselves with the TSE as possible candidates with a particular political party, the CD party gets canceled.

In secret and at the last minute, the Salvadoran Elections Tribunal TSE decided to cancel the political party Cambio Democratico.

The TSE claims that they didn’t cancel Cambio Democratico to prevent Nayib Bukele from Running for president; however, many Salvadorans disagree, this is why.

The deadline for individuals to register with TSE as candidates for a particular party was midnight on July 25th, 2018. On that day at 7 pm, the TSE met in secret at their offices.

By 9 pm, on the 25th, they had decided to cancel Cambio Democratico; however, they chose not to make the cancelation public until the following day, after the deadline for inscription had passed.

You might disagree and believe that it was not done to prevent Nayib Bukele from running for president. If you do, I respect your opinion, but I disagree.

The July 25th CD cancellation marked the start of Bukele’s alliance with the political party GANA.

After the last-minute cancellation of Democratic Change, an alliance with GANA was the last option Bukele had if he wanted to compete in the 2019 presidential election.

Bukele’s registration as a presidential candidate with GANA was done with a lot of drama. The following times are not specific, but all the events happened on July 25th. 2018.

At around 7 pm, the Supreme Electoral Tribunal or TSE met secretly to discuss canceling Cambio Democratico.

By 9 pm, the Supreme Electoral Tribunal or TSE has already decided to cancel Cambio Democratico; however, they choose not to make it public until the following day.

Around 9 pm to 10 pm, Bukele gets word of the secret meeting. Bukele confirmed later that he knew something was going on with regards to CD and the TSE.

Around 10 pm to 11 pm and in secret, Nayib Bukele officially withdraws his affiliation with Cambio Democratico.

Between 11 pm to 11.59 pm, Nayib Bukele officially affiliates himself with GANA, the last political party available for him to compete in the 2019 elections. This affiliation was done in secret.

The following day, the Supreme Electoral Tribunal or TSE announced that Cambio Democratico had been canceled; therefore, Nayib Bukele couldn’t compete in the 2019 presidential elections.

After the TSE press announcement, Bukele announced that he had severed his affiliation with Cambio Democratico and had affiliated with GANA. Therefore, he was going to compete in the upcoming 2019 presidential elections. It is real. It is the road Nayib Bukele had to navigate to become a presidential candidate.