El Salvador foods are a mixture of Spanish cuisine and indigenous foods from native groups such as Mayan, Xinca, Lenca, Pogoman, Cacaopera, and Pipil. Most of the traditional Salvadoran foods are made with corn and include pork, chicken, or seafood. Pupusas, the national dish of El Salvador, are hand-made tortillas made out of corn or rice flour filled with cheese, pork, beans, or Loroco (a local edible flower). It is then topped with homemade Curtido (a sour cabbage salad) and tomato sauce.

Pupusas are the most well-known Salvadoran dish worldwide; it is the pride of all Salvadorans. Tell any Salvadoran that you will visit El Salvador. I am sure almost all of them will tell you that you have to try the pupusas.

You can eat pupusas just as they are, or you can top them with homemade tomato sauce or Curtido, which are served as side dishes.

Here are a few things for you to keep in mind when eating pupusas in El Salvador.

Pupusas are typically made of a corn-based tortilla; however, they are made with a rice-based tortilla in some parts of the country. The taste is different, so it will be up to you to decide which you prefer.

The traditional fillings of pupusas are cheese or pork; nevertheless, you can get them with other items such as beans, Loroca flower, or Ayote (a Salvadoran Punkin.)

When it comes to Curtido, each Pupuseria will serve a different variation of this side dish. The main ingredient of Curtido in all places is cabbage; but, some Pupuserias will add their own mixture of carrots, onions, or spices to it. So, Curtido will taste different at each Pupuseria.

Pupusas is a dish that you can easily find all over El Salvador. This traditional Salvadoran food is good at any point of the day, breakfast, lunch, or dinner.

RELATED: If you want to know more details about the national dish of El Salvador, visit our Salvadoran Pupusas page.

Traditional Salvadoran tamales are made using corn dough, spices and filled with chicken, a slice of boiled egg, an olive, green pepper, and a small piece of potato. It is then wrapped in banana leaves and cooked in water.

The tomato-based sauce, which goes inside the tamale, changes depending on the individual or families; everyone, who makes tamales, has their own recipe for this sauce.

The traditional tamale is the one most people make on special occasions; however, there are other versions that you might consider trying.

Here are the different variations of tamales that you can find in El Salvador.

This tamale is stuffed with a reddish tomato-based sauce, meat (chicken, pork, or turkey), vegetable (olive, green pepper, potato, or a combination), and in some instances, a slice of boiled egg.

These are mostly made in individual homes and for personal use. They are made out of corn dough and stuffed with Salvadoran sugar or Dulce de Atado

This tamale belongs to the Salvadoran tamale family but is seasonal. The main ingredient for this tamale is fresh corn, available only at the crop’s earliest stages.

The corn dough is mixed with milk, butter, and either salt or sugar; then, it is wrapped in corn leaves instead of the traditional banana leaves and cooked in water. Lastly, these tamales are served with Crema, a Salvadoran cream cheese. Salvadoran Tamales
RELATED: El Salvador has some excellent local drinks that go along nicely with the traditional Salvadoran foods. Visit our page “10 popular Salvadoran drinks you definitely need to try” to know them.

Yuca con chicharrón consists of fried pieces of Yuca root served with chunks of crispy pork or Chicharrones. The typical dish is topped with cabbage and tomato sauce.

Yuca Frita is made from a delicious root vegetable similar to cassava. It is a starchy root, almost like a potato when it comes to texture and taste. The preparation is more tedious, firstly you need to steam it and then deep-fried it to a golden brown color.

All over El Salvador, you will find the same Yuca Frita with Chicharron; the only thing that it will change is what they are served with, such as the type of cabbage and sauce. Sopa the Pata or Feet’s soup is made using beef meat, tendons, and meat from the cow’s leg. The broth is complemented with a wide variety of vegetables such as Yuca, corn, plantains, beans, tomatoes, and cabbage.

This soup is a delicacy that is not available all the time, most places which make it will do it on specific days of the week.

Sopa de Res is a traditional Salvadoran lunch soup. It is made by cooking large chunks of beef with a mixture of vegetables that include corn, carrot, cabbage, and zucchini. This famous soup is found mostly at lunchtime in small food places at the local markets.

Mondongo soup is made using cow’s tripe, tendons, and cartilage mixed with vegetables, corn, and spices. This is a popular dish among local Salvadorans for getting rid of hangovers. It is mostly sold during the weekends at lunchtime. Gallina Indian soup or Sopa de Gallina India is made using wild or indigenous Indian chicken. This is a popular lunch dish found in local markets. Most restaurants only serve it on special occasions or during the weekends. The soup is mixed with vegetables and rice.

RELATED: Just like traditional food and drinks, El Salvador produces fantastic coffee beans that you might want to try. Visit our page, “Types of coffee produced in El Salvador,” and learn more about it.

Empanadas are ground plantain shaped into little oval balls stuffed with vanilla custard; they are served with sugar sprinkled on top after cooked. Empanadas are served as a dessert or snack, usually with coffee.

Fried Pasteles or Pastelitos are another popular Salvadoran food. It is prepared using corn dough with achiote powder and other condiments.

Each Pastelito is made into a half-moon shape filled with either meat, vegetables, or a combination. Fried Pasteles are deep-fried and served with tomato sauce and cabbage on the side. 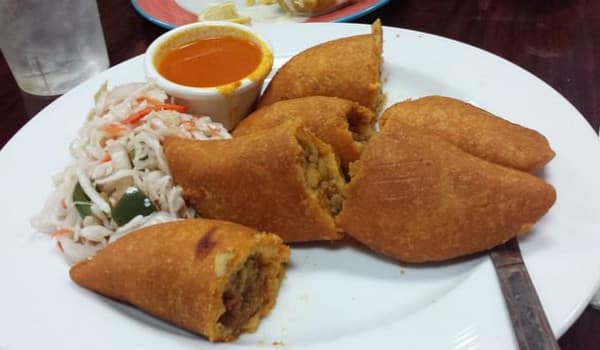 Quesadilla is a delicious traditional Salvadoran dessert. This bread is made with a mixture that includes cheese, butter, eggs, milk, and flour.

The best Quesadillas are the ones cooked in an artisanal oven that uses wood. The quesadillas are top with sesame seeds and usually served with a hot cup of coffee or chocolate.

The traditional food is available everywhere, in restaurants, coffee shops, counters at corner stores, and on the side of the main highways.

Panes Rellenos are basically a chicken or turkey sub mixed with a tomato-based sauce and spices; it is served with tomatoes, cucumbers, and lettuce.

Panes Rellenos are also known as Panes Migueleños, this is because they are characteristic of the department of San Miguel, in the eastern part of the country. 12. Fried plantains and eggs with cream and refried beans

Platanos, Huevos, con Crema y Frijoles or fried plantains and eggs with cream and beans is the typical Salvadoran breakfast found all over El Salvador. This particular dish includes either Tortillas or bread (Pan Frances).

Each location that serves a typical Salvadoran breakfast will offer different variations of scrambled eggs and beans. The following are other traditional Salvadoran dishes found all over the country.

Stuffed loin or Lomo Relleno is a traditional meal mainly cook during special occasions such as Christmas. It is pork or beef tenderloin flattened and then stuffed with more meat and vegetables. The typical stuffing includes carrots, onions, potatoes, peppers, and diced bacon or ham.

Shellfish cocktail or Coctel de conchas is a typical dish popular all over the Salvadoran coast. It is a combination of black shell clams (conchas Negras), diced tomatoes, cilantro, lemon juice, and onions. Worcestershire sauce, hot sauce, and salt are added to give it flavor.

Nuegados are made of Yuca or corn dough; they are deep-fried and served with honey.

The dough for this food is the same as the one for Fried pasteles. The dough is flattened like a tortilla and then fried until done. The enchilada is topped with different items such as refried beans, eggs, avocado, cheese, and tomato sauce.

Casamiento is made with leftover beans and rice. They are mix together and refried again to give it a unique taste; some places add vegetables to give it additional flavor.

What are the most common Salvadoran foods?

Pupusas is the traditional Salvadorian food that is most commonly eaten by Salvadorian. Nevertheless, tamales are right behind the pupusas as the most common food eaten in the country.

Pupusas are so famous that they have their national holiday; the second Sunday in November is National Pupusa Day in El Salvador.

Tamales are commonly eaten as well. This Salvadorian food is served at funeral viewings, weddings, birthday parties, and other typical celebrations. Most official gatherings in El Salvador will offer tamales as a meal.

El Salvador is the smallest country in Central America, but it has fantastic gastronomy. Whenever you get a chance, try the traditional El Salvador foods, I am sure you will enjoy them! Travel to El Salvador and indulge yourself with the excellent local cuisine!