Conchagua volcano in El Salvador is an eroded stratovolcano located on the western side of the Gulf of Fonseca; it has one of the most beautiful views of the Salvadoran coast.

Many people, local and foreign, venture into this fantastic volcano to get a glimpse of the Gulf of Fonseca and its islands; and also, to be able to see astonishing sunrises and sunsets.

The name of the volcano, Conchagua, in the old Lenca language means “narrow valley.” According to historians, the name originates from a local heroine named Comizahual, which means “the flying tiger or El Tigre Que Vuela in Spanish.”

In fact, the trail that takes you to the highest viewpoint in the volcano is called the flying tiger trail.

Conchagua is a volcanic complex with two volcanic cones, Ocotal and Banderas; both volcanoes have craters, but that of Banderas is more obvious or visible.

To the west is Ocotal, the older volcanic cone, which, over its existence, has had many volcanic movements and erosions; therefore, Ocotal does not have the typical shape of a volcano.

Now, to the east is Banderas, a relatively younger volcano cone that is better preserved, and it looks more like a volcano.

Visiting the Conchagua volcano is a top thing to do in El Salvador; this region offers camping areas, cabins, trails, canopy, and fantastic viewpoints.

Also, it has a tower with a view that reaches La Union Bay and all the islands of the Gulf of Fonseca that Honduras, Nicaragua, and El Salvador share.

Conchagua volcano has plenty of flora and fauna for those who like eco-tourism; nevertheless, the best attraction of this volcano is the fantastic views that you will get to see.

When visiting Conchagua, it is recommended that you bring food, snacks, water, insect repellant, and everything you might need. At the volcano or nearby, you will not be able to buy any of those things.

If you are visiting Conchagua with a Salvadoran Touring Company, they will tell you what you need to bring with you for the trip. 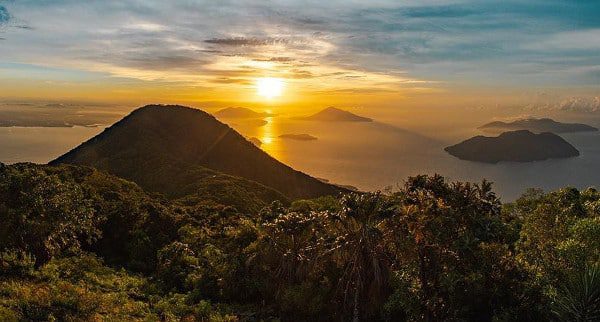 Camping at the volcano.

Many people, who visit Conchagua, ends up spending the night at the volcano. Getting to this volcano is not easy, therefore getting the most out of the trip involves camping.

Conchagua has camping areas high up with fantastic views of the Gulf of Fonseca and its islands; these views are evident by the many images of sunsets and sunrises taking from the viewpoints available online.

Now, if your car is not up to the challenge of taking you to the two main camping sites near the top, you can spend the night at the lower end of the volcano at a property own by CODECA.

Many people stay at the lower end and early in the morning take the 1 1/2 hour hike to the first main viewpoint.

Furthermore, some people take the challenge and take the hike to the highest viewpoint on the volcano. This hike goes through the pathway called The Tiger that flyes or El Tigre Que Vuela.

The trek from the bottom camping site to the highest viewpoint takes about two to two and a half hours, depending on your fitness level.

Getting to the Volcano.

Traveling to the Conchagua volcano is not an easy task, first, you need to get to the city of La Union or the colorful town of Conchagua.

Now, depending on your starting point, it can take a long time to get there. As an example, it can take up to five hours from San Salvador or the International airport to reach La Union or Conchagua city.

Next, from either Conchagua town or La Union city; you will need to get to a spot called El Faro or the lighthouse; here you will access to the road that will take you to the volcano’s camping sites.

The road from El Faro or the lighthouse to the two main camping sites is trough a dirt road that is not well maintained. So, you definitely need to use an automobile with four-wheel capability.

To sum up, getting to the Conchagua volcano is an adventure in itself, but the trip is worth taking.

Ecotourism at Conchagua volcano and nearby area.

Conchagua volcano and the municipality is a fantastic location for ecotouristic activities.

To begin with, you can visit the volcano enjoy the plentiful flora and fauna that you will find at the volcano.

Also, you can venture off the volcano and take a boat ride into the nearby islands and enjoy everything they have to offer.

Lastly, you can enjoy the pristine and underdeveloped beaches that you will find at the Gulf and the local islands.

All in all, the area of the Conchagua volcano is a fantastic place for ecotouristic activities. The Conchagua Volcano in El Salvador offers amazing views of the three bordering countries, El Salvador, Honduras, and Nicaragua; they are all linked by the Gulf de Fonseca.

In Conchagua, tourists, both local and foreign, can visit and appreciate the entire Gulf of Fonseca, the islands, breathe fresh air, enjoy the climate, and admire the local flora and fauna.

Also, when in the area, you should visit the small town of Conchagua; it is a quiet, clean, and cozy place worth visiting.

So, if you ever get the chance, travel to the eastern part of the country, visit the Conchagua volcano; I am sure you will enjoy the visit!