The volcanoes in El Salvador range from towering stratovolcanoes such as Izalco, Santa Ana, San Vicente, and Chaparrastique; to volcanoes that bear a resemblance to a mountain such as Guazapa and Cerro Verde. El Salvador is known as a land of volcanoes as it is located in the Pacific ring of fire.

To appreciate one of these volcanoes, you don’t need to go far from popular and centrally located cities, such as Santa Ana, Santa Tecla, Juayua, Nahuizalco, or San Salvador; within 22 miles of any of these cities, you will find a volcano to explore.

There are different ways to explore and appreciate these attractions. Hiking to the summit is the most common and popular way to explore them, followed by observing them from one of the many lookout points around the volcanoes.

Hiking to the summit.

Surely, hiking to the summit is the best way to explore and appreciate the beauty of these volcanoes, it is not an easy thing to do; but, it’s worth the effort to get it done.

The most accessible volcanoes, with ideal trails to reach the summit, are El Boqueron, Santa Ana, and Izalco. On the other hand, if you want a more challenging hike, try either the San Vicente or Chaparrastique volcanoes; these volcanoes have no official trails to the summit.

Because the trails leading up to the summit are dangerous and challenging, I recommend you do the hike in a group and with a professional guide, especially if you are an amateur hiker.

Appreciating the volcanoes from lookout points.

If hiking is not your thing, but you still want to get a closer look at the fantastic volcanoes. You can visit parks like El Boqueron or Los Volcanoes national park, these national parks have open areas with great views of the volcanoes.

El Boqueron and Los Volcanoes National park are not the only ones that have these lookout areas. Each volcano has different ways that you can appreciate their beauty without having to reach the summit.

So, depending on your location, the volcano near you might offer different activities or ways to view them. The best way to decide what volcano to visit is to speak to a tour company in El Salvador and see what they recommend. Here are the most attractive volcanoes in El Salvador.

The Santa Ana or Ilamatepec volcano.

The Santa Ana or Ilamatepec volcano is one of the most visited in the country. Ilamatepec is located at the Cerro Verde National Park near the city of Santa Ana, it is one of three volcanoes that can be found at this park.

This volcano is the highest in the country and also one of the most active. Hiking Santa Ana is not for everyone; the trails are narrow and challenging.

Nonetheless, if you take the challenge and reach the summit, you will be rewarded with a fantastic view of the other two volcanoes, the Coatepeque lake in the distance, the Pacific Ocean, and a beautiful scenic view of the surrounding area.

Furthermore, at the summit, you will get to see the remarkable lake that sits inside the crater with its turquoise color. Moreover, you will get a 360-degree unobstructed view of the entire region.

You don’t need to hike to the summit to appreciate this volcano, you can simply visit the Cerro Verde National Park and enjoy the view from one of the many lookout points.

The best way to access this volcano is from the City of Santa Ana, either by taking a public bus or with a tour company. Once you get to the base of the volcano, the trip can be arranged with one of the official guides working at the park. If you need or want more information about this volcano, visit the Santa Ana volcano page.

Izalco Volcano, the lighthouse of the Pacific.

Izalco volcano is one of the youngest in the American Continent, it is an iconic stratovolcano located at the Cerro Verde National Park.

This volcano is also called the lighthouse of the Pacific. It got the nickname from the flaring eruptions and the lava coming out that was visible from the Pacific Ocean, therefore looking like a lighthouse.

This volcano, just like Santa Ana, is a popular destination for those looking to hike a volcano all the way to the summit.

The hike is challenging, even for experienced hikers; nevertheless, once you reach the top, you’ll be rewarded with spectacular panoramic views of the entire area.

The Izalco volcano has no vegetation; therefore, the perfect volcano cone is visible from afar. One of the best locations to see this fantastic stratovolcano is from the viewpoints at the Cerro Verde National park.

Hike the Izalco Volcano and combine extreme hiking and ecotourism; you will have a great time. Visit the Izalco volcano page, if you want more information about this Salvadoran volcano.

Since the volcano is located near the most populated areas of the country, there are plenty of sites around the volcano where you can view and appreciate its magnificence. At these places, you will find open spaces or restaurants with great views of the volcano.

At El Boqueron, you have four options to explore and appreciate the volcano.

As you can see, the San San Salvador volcano is a great place to spend time exploring.

The main volcanic-crater at El Boqueron is about 1.5 km in width and about 500 meters deep; El Boqueroncito is located inside the main crater. 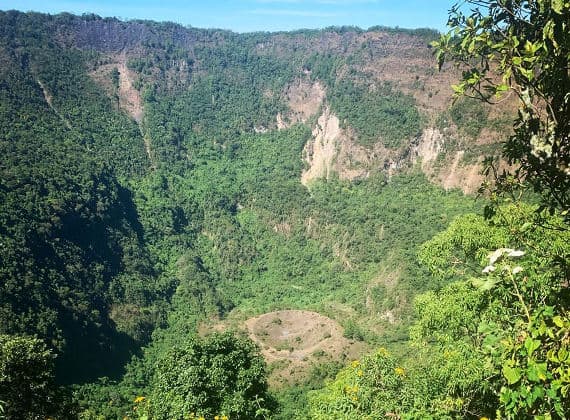 The Chaparrastique volcano or volcano of San Miguel is located in the eastern part of the country. This volcano it’s definitely not for everyone to explore or hike.

This massive stratovolcano is visible from many lookout points near the volcano or from the city of San Miguel.

If you are adventures enough to want to hike Chaparrastique, keep in mind that this volcano is not protected by any national park or has official trails to follow; the volcano is there for anyone with the courage to explore it.

If this is an adventure that you want to take on, I recommend for you to look for a local tour guide who knows the way and also to look into security.

Furthermore, keep in mind that this fierce-looking volcano is one of the most active in the country, the last small eruption was in 2016. If you need more information about this volcano, visit the Chaparrastique volcano page.

The San Vicente volcano or Volcano Chichontepec is the second tallest in the country, next to Santa Ana volcano. This massive twin-peaked volcano, just like Chaparrastique, is not suitable for everyone to explore.

The volcano is surrounded by dense vegetation, therefore, getting to the summit or high up is the best and only way to see the areas around it.

Getting to the top is challenging as the trails are not accurately maintained or marked. Nonetheless, if you reach the summit or high up, you will get some great views of the area.

Furthermore, on a clear day from the San Vicente volcano summit, you can see the other two large volcanos in the distance, Chaparrastique, and Santa Ana.

Conchagua, one of the volcanoes in El Salvador’s eastern region.

Conchagua volcano is a stratovolcano located in southeastern El Salvador, near the city of La Union, it overlooks the Gulf of Fonseca.

The volcano is surrounded by dense vegetation; nevertheless, there are plenty of trails for you to explore and enjoy the local flora and fauna. Furthermore, you can go camping in the area.

This volcano is clearly visible from many of the La Union beaches and the Gulf of Fonseca.

This volcano is not as attractive or popular as other stratovolcan’s in the country, mainly because it’s located farther away from the larger cities. However, if you make it to the area, look into exploring this beauty.

Most visitors use Cerro Verde as a stepping stone to get to either Izalco volcano or Santa Ana volcano.

The top activity at Cerro Verde is hiking, the trails are more accessible and easier to navigate. From this volcano, you will be able to get some astonishing views of the stratovolcano’s in the park, Izalco and Santa Ana.

Guazapa, one of the best volcanoes in El Salvador with recent history.

Guazapa volcano is on this list because of the civil war of the ’80s. This mountain volcano is not the highest or the best looking volcano in the country; but, it was an instrumental location during the armed conflict.

While hiking the trails, you will see trenches, encampments, and cemeteries dug by guerilla fighters. The hike itself is not difficult as the trails are easy to navigate.

A lot of travelers go to Guazapa from Suchitoto, it’s a great way to see a colonial town, hike a volcano, and learn about the armed conflict of the ’80s.

Other volcanoes in El Salvador worth mentioning.

These are other volcanoes in El Salvador worth mentioning, they are not as popular or well-known, nonetheless, they are excellent options for exploring.

There are other smaller and lesser-known volcanos in the Salvadoran territory that are not included in this list.

Obviously, there are other volcanoes in El Salvador, great for exploring. In this list, I added the most well-known and popular.

The three volcanoes at Los Volcanos National Park and El Boqueron are by far the most popular destinations. These volcanos have excellent trails and local guides ready to assist you with whatever you might need. Additionally, they are near big popular cities like Santa Ana, San Salvador, and Santa Tecla.

The Volcanoes at San Miguel and San Vicente are for individuals who want a more challenging journey. These volcanoes are not easy to explore, and the trails are not well kept.

Lastly is the Guazapa volcano, an easier one to explore, but rich with recent history.