The city of Ahuachapan El Salvador is a gorgeous mountain small city located in a region that produces fantastic coffee and has geothermal activity. Ahuachapan is the westernmost city in El Salvador near the Guatemalan border.

The city of Ahuachapan is one of six towns on La Ruta de las Flores or the flower route; one of the most popular touristic destinations in the country.

Basically, this touristic route takes you into six colorful towns in the western part of the country, Nahuizalco, Salcoatitan, Juayua, Apaneca, Concepción de Ataco, and Ahuachapan.

In fact, visit the La Ruta de Las Flores page if you want to know more about this colorful touristic route.

A short history of the city of Ahuachapan.

According to historians, Ahuachapan was founded by Mayan Indians of the Poqoman tribe in the 5th century. Then, in the 15th century, the area was invaded and overtaken by the Izalco tribes.

Undoubtedly, the city of Ahuachapan has an intriguing history. In 1821, the area, by force, became attached to Guatemala; however, in 1824, it became part of El Salvador once again.

Eventually, in 1862, Ahuachapan officially became a city in El Salvador; and in 1869, it became the departmental capital.

Top attractions and things to do in Ahuachapan El Salvador.

Certainly, the top attractions in the city are the colonial-style church and the La Concordia area. Now, if you venture outside the city, you will have other options available such as El Espino Lagoon and geothermal pools.

In addition to visiting the top attractions, you can enjoy the local gastronomy, try the local coffee grown in the mountains nearby, and immerse yourself into the local culture.

For the most part, tourists who visit Ahuachapan do it as part of the La Ruta de Las Flores trip; nonetheless, some people stay in town and use it as a base of operations and take day trips to nearby attractions.

Ahuachapan, just like all small towns in El Salvador, has a beautiful church. The church of La Asuncion is a charming colonial-style building with more than 100 years old history attached to its walls.

This is an excellent starting point to explore the city of Ahuachapan and its culture. Visit the church and learn about the history of the town!

La Concordia is a small passage and a town square located next to the impressive La Asuncion Church.

La Concordia area has colorful murals, which give the street a cheerful and unique look.

If you are visiting Ahuachapan, you cannot miss visiting La Concordia. Here, in addition to exploring the murals, you will have plenty of options to try the local gastronomy. El Espino lagoon is located about five kilometers from downtown Ahuachapan. This lagoon is important to the country’s history due to the events that happened here in the 18th century.

According to historians, the shores of this lagoon is where the first battle of Central American post-independence times was fought.

The battle was fought between the Salvadoran Army lead by General Manuel José Arce and Guatemalan forces under the control of the Mexican government.

Today in 2020, around the lagoon, you will find places to eat and swim. The lagoon’s water is of a murky appearance and not your typical blue; this is in part due to climate change and the locals not taking care of the lagoon.

The area around Ahuachapan has geothermal pools that are used to produced electricity. The local geothermal plant, LAGEO, provides a large percentage of energy utilized in El Salvador.

Now, the best way to experience these geothermal waters and energy is to visit one of the local geothermal touristic spots and take a dive into one of the swimming pools.

and are two of the most popular hot springs located in the area.

The Farolitos festival in Ahuachapan.

Emphatically, the Farolitos festival or lanterns festival is a colorful tradition celebrated in the city of Ahuachapan that has to be seen and appreciated. Without reservation, it is is one of the most colorful festivals in the country, and one of the most enjoyed by tourists.

This event is held every year on September 7th; it includes a parade under the lights of the lanterns that illuminate the night of Ahuachapán. This parade and celebration are conducted to honor the birth of the Virgin Mary.

Even if you are not into religion, visiting the city of Ahuachan during the Farolitos festival is worth doing. 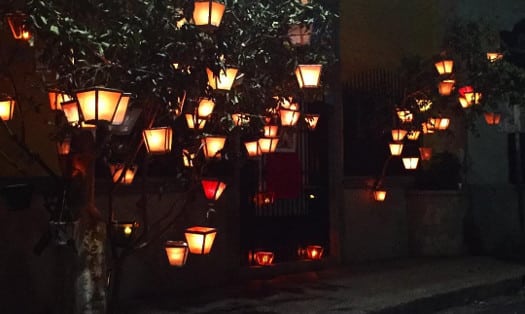 If you are looking to spend the night in this city, look at the following hotels.

Obviously, if you are not able to find accommodations in Ahuachapan, look into the cities of Juayua or Ataco, which are nearby.

To sum up, the colorful city of Ahuachapan is worth visiting, it has a fantastic colonial church, excellent local gastronomy, impressive murals painted by local artists, and much more.