Popular Salvadoran drinks include Horchata de Morro, different types of Atole, and Chilate. El Salvador drinks result from recipes from indigenous and Spanish influences that have been kept alive for generations.

Other typical Salvadoran drinks include Coconut water and Kolashampan, which is a Salvadoran carbonated beverage. El Salvador drinks also include alcoholic beverages such as Chaparro or La Chicha and local beers. Even though drinks with similar names exist in other Central American countries, the Salvadoran drinks have a distinctive taste. I am not saying that the drinks in El Salvador taste better or are better. I am just stating that they have a different flavor.

10 of the best El Salvador drinks.

Here are more details about the most popular Salvadorian drinks that you should definitely try.

Horchata de Morro is one of the most popular Salvadoran drinks; it is almost as famous as pupusas. It is made out of Morro seeds combined with water or milk, cinnamon, nutmeg, and vanilla; the result is a delightful milky, sweet drink, which is served over ice.

Now, it is essential to point out that Horchata, at most establishments, will have the same taste. However, in some parts of the country, especially in remote areas, you will find variations in its flavor.

Atole de Elote or Atol de Elote is one of the most popular drinks in El Salvador; its origin can be traced back to the ancient Maya civilization. This popular creamy drink is served hot and is made out of fresh corn mixed with milk or water, cinnamon, and sugar. 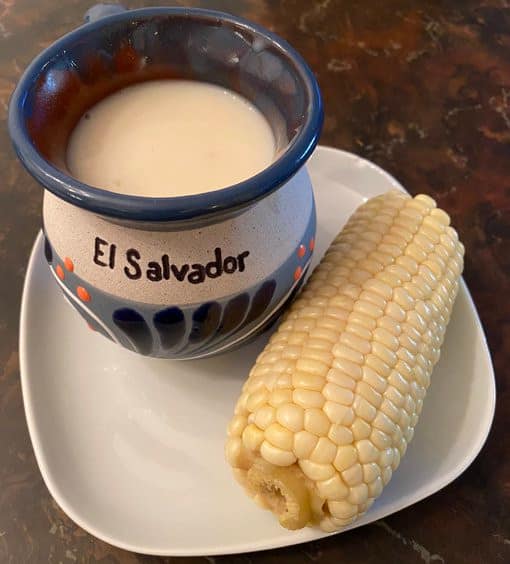 Atole Chuco or Atol Chuco is made out of purple fermented corn, which gives it a darker dirty color. This drink is the oldest traditional hot drink in El Salvador; its origins date back to pre-Columbian times.

This drink is sold late in the afternoon in municipal parks or in small stands all over the country. It is traditionally served on a dish, like a bowl, made from the fruit of a tree called Morro.

El Salvador drinks include the popular Liquor de Chaparro or La Chicha; this is your typical moonshine liquor from El Salvador fermented out of corn and sugar cane.

For many years, La Chicha was a clandestine liquor fermented by locals and served mostly during celebrations; nowadays, it can be bough legally.

El Chaparro or La Chicha is a liquor created during pre-Columbian times by Maya, Aztec, and Inca Indians. During this period, it was made 100% from fermented corn.

During colonial times and with sugar cane introduction, La Chicha started to be created out of corn and sugar cane.

Atole de Piñuela is a typical Salvadoran drink made out of a fruit of a plant called Piñal. The Piñal fruit, which looks like light bulbs, is cooked and then prepared with water, rice powder, brown sugar, cinnamon, and sometimes salt.

Chilate is a typical drink that dates back to colonial times or even before. This drink is native to the Central American region and parts of Mexico.

Now, depending on your location in Central America or Mexico, the ingredients for the drink and flavor will differ.

In El Salvador, Chilate is made out of corn mixed with other spices such as cinnamon, chili, and black pepper.

Tamarind juice is a popular drink in El Salvador prepared from the fruit found on tamarind trees; this is a simple and refreshing drink made with tamarind pulp, water, and sugar.

Ensalada Juice is also a simple drink made with water, sugar, and chopped pieces of fruits such as apples, melon, and other tropical fruits. This drink has a taste similar to sangria but without the liquor.

If you like beer, El Salvador has a few options for you; in the country, beer is the most popular alcoholic drink. Pilsener is by far the preferred alcoholic drink for most Salvadorans; it is your typical lager beer brewed locally. Suprema, another popular beer, is a European-style beer with a distinctive taste fermented locally since the 1960s. Coconut juice is a popular drink in El Salvador. The best way to experience this drink, right of the source, is at the beach or stopping at one of the many street vendors you will find along the coastal highway.
These vendors will simply chop off the top of the coconut for you, serve it with a straw, and in a few minutes, you will be tasting the refreshing tropical juice.

Kolashampan is a unique Salvadoran soda made out of sugarcane that has an orange color. The taste of this soda is hard to describe, most people, because of its color, think that it will taste like oranges; however, that is not the case.

I am surely not going to try to explain the taste of Kolashampan, you’ll definitely have to try it to see why many Salvadorans love this drink.

El Salvador is a beer-drinking nation. The most popular beers among Salvadorans are Pilsener, Golden, Regia, and Suprema. Most Salvadoran’s are loyal to one specific beer, so if you like Pilsener, you definitely don’t like Reggia.

When it comes to liquor, most people drink Venado, which is your typical light rum. Venado is one of the cheapest rum, which can be the reason why it sells a lot.

The ten drinks listed above are the most well-known in the country; nevertheless, they are not the only ones.

If you ever get the chance to travel to El Salvador or are already living in El Salvador, you should definitely try some of the Salvadoran drinks mentioned above.