The water pollution in El Salvador is getting worse every year; rivers, lakes, ponds, streams, and wells are so polluted that the country has less drinkable water. Every year more people are getting sick due to drinking non-potable water. Not to mention that in some communities around the country, there is no water available at all.

If we as Salvadorans don’t start changing our ways, the water pollution problem will get to critical levels never seen before. A sad statement, since not long ago, the country was a lush land with plenty of clean water. Las Pavas water plant. Photo by. @FredckBenitez
“More than 600 thousand people in El Salvador do not have access to any type of drinking water and sanitation service, not even through the collection of rainwater. Moreover, more than a million people only have access to inadequate water service.”
2016 report by the United Nations

The Salvadoran water crisis, due in large part to pollution, is more visible during the COVID-19 pandemic. Thousands of Salvadorans are dealing with COVID-19 with barely any water, and some with no water at all.

How bad is the water quality in El Salvador?

People who never been to El Salvador and plan to visit ask; Is the water safe to drink in El Salvador? The short answer is not really. Foreigners visiting the country are advised to use bottled water as much as possible.

Furthermore, Salvadoran, mostly in urban areas, buy bottled water to drink; this is because the water quality is inadequate. People who can’t afford to buy bottled water have to take their chance drinking tap water; if they even get that.

The water quality in El Salvador, heavily due to pollution, is not up to proper sanitary standards.

Why is the water pollution in El Salvador that bad?

The water pollution problem in El Salvador is a combination of many factors, such as climate change and deforestation. Additionally, the Salvadoran culture and the government have played a significant role in creating this problem.

Undoubtedly, climate change has a big effect on the quality of water available. This is a problem caused mainly by human activity such as burning fossil fuels; this is a big problem that also affects the quality of air in El Salvador.

As climate changes, temperatures rise; because of that, the delicate balance of the country’s climate gets disrupted. Additionally, climate change creates droughts, which reduces the earth’s ability to absorb water. Also, climate changes produce more intense storms that can cause flooding and endanger water quality.

All things considered, climate change is something real that we have to deal with. It affects the amount of rainfall the country gets; furthermore, it also affects the overall quality of the country’s water supply.

How does deforestation contribute to water pollution? In short, deforestation accelerates soil erosion that affects water sources that maintain our rivers, lakes, and wells.

If the water sources decrease, it will affect the water quality and the amount of water available.

The organization earth law center published in an article in 2019; it says the following about El Salvador.

“Almost 85 percent of its forested cover has disappeared since the 1960s, leaving about 5 percent of the land area forested. Less than 6,000 hectares are classified as primary forest.”

In any case, deforestation in El Salvador has already affected our water sources and supply. Furthermore, a large portion of the territory is not even suitable for food cultivation anymore.

Salvadorans have contributed and continue to contribute to the water pollution problem. Now it is necessary to mention that not all Salvadorans contribute to this issue. There are plenty of people in the country who focus on protecting the environment; therefore, improving the water quality.

Disposing of trash and cutting down trees are two significant factors that many people do that affect pollution and the country’s water quality.

The trash problem in El Salvador has a significant effect on our water supply and quality. Obviously, if you have been on any road, urban or rural, in El Salvador, you will notice thrash almost everywhere.

The trash on the street in some urban areas is a problem perpetuated by municipal governments; which, don’t do a proper job collecting and disposing of this waste.

Nevertheless, many Salvadorans also contribute to the pollution of our waters. For example, rivers, lakes, and the ocean are a top destination for locals to spend time relaxing and having fun.

Many Salvadorans, who visit these spots, don’t pick up after themselves and leave the areas filled with garbage. This trash left behind ends polluting rivers, lakes, mountains, and the ocean.

People who spend time at either the beach, lake, or river can attest to how dirty these spots are the end of the day.

People toss the garbage in the ground without regard for the implications of doing so. Improperly disposing of trash is a cultural problem that needs to be corrected.

Many Salvadoran’s don’t care and cut down trees to be used as burning wood for cooking or construction. Others do it to clear the land and use the space for other purposes.

Lock of governmental oversight allowed individuals and companies to cut down trees with no concern for the environment.

All things considered, as Salvadorans, we need to change the cultural part that leads us to be okay with just throwing trash everywhere. Also, we need to help the environment by not cutting down trees unnecessarily and plating more.

The Salvadoran government, both at the national and local level, have contributed to the issue of water pollution. Regulations and disposal of waste are the main issues that the government has failed to control.

Creating and enforcing regulations that protect the environment is something that the government has failed to do, both at the local and national level. In the past, permits have given to companies and individuals to exploit natural resources with no regulations.

Also, properly disposing of the waste is another important thing that the government has failed to get under control. An example of this is all the trash we see in urban areas. This garbage, if not pick up and dispose of in the right location, will end up in our rivers and streams; therefore, contaminating the water.

The Salvadoran government, over the years, has helped to get us where we are right now with the issue of water quality.

Summing up, a combination of all four factors, cultural habits, the government, deforestation, and climate change has gotten us to this point. We definitely need to find a way to reverse this water pollution problem in El Salvador.

How can we solve the water crisis in El Salvador?

To begin with, we all have to get involved and face this problem; we can’t say that this is an issue the government needs to fix, or that is not our problem.

All people living in El Salvador, locals, and foreigners, have to do their part to protect the environment, which in turn will improve the water quality.

I am not claiming that I have the solution; nonetheless, there are a few things that we can do right away. For example, we can recycle, stop throwing trash on the streets, and pressure the local government to take action on the matter.

If we take personal accountability and do the little things that we can, it will help the environment. 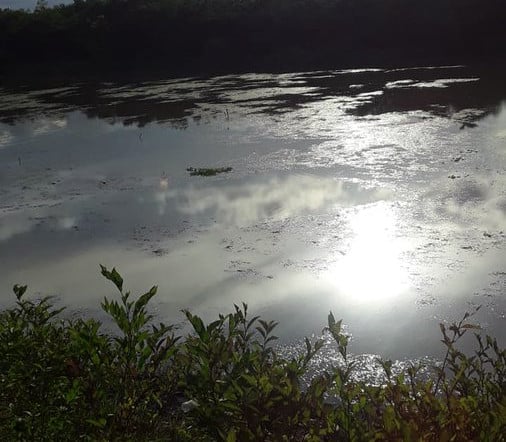 The water crisis in El Salvador is something that we, as a society, need to deal with right away. We can’t wait any longer as the water pollution in El Salvador gets worse every year.

Let’s put an effort and look for a way to deal with this problem that affects all of us!